Time for an overhaul – Again…

My previous board did not match very well with the new band I started in last november. I had a clear need for an easier way of switching between electric and acoustic pickups and amps. With my previous board, I had to make too many compromises to make it happen. Now I found a way to do it without sacrificing loops on my Musicomlab. I added two A/B switches to make it happen. These are remote controlled by the Musicomlab so I can include them in my presets. This is cool because I can switch between, for example, piezo pickup through a chorus pedal into the acoustic amp and electric pickup through an overdrive and a delay into the electric amp, just by switching to another preset. It works very convincingly.

I started by drawing a diagram of all the connections so I could figure out how it should work and what should be included. I dismissed my wireless, my compressor and my tremolo. I hardly ever used the compressor and tremolo so they were not needed. The wireless had to go because I wanted to run stereo out of the guitar and into the pedal board. This would require two receivers on the board, and as pedalboard real estate was already very sparse, I decided to drop it.

I already had a gig bag that I wanted it it to fit in so the size was pretty much given from the start. I had almost all of the pedals already (except for the Spark mini booster and the two A/B switches).

My Parker Fly Classic guitar is fitted with a Fishman piezo pickup in the bridge. I can connect it with a stereo cable and have the electric signal in one channel and the piezo in the other channel. I connect the two channels to each side of an A/B switch so I can switch between the electric pickups and the piezo on the pedalboard.

At the other end of the pedalboard I also added an A/B switch so I could switch between my electric amp and my PA output (for acoustic sounds).

The A/B switches I chose were the only ones I could find that allowed for remote control via the Musicomlab’s programmable relay switches. The switches are G-Lab Aux AB. I had to make a small box that converts power and switching to the special AUX plugs the G-lab switches use.

I wanted to incorporate my Boss noise gate since the TC Nova Drive pedal can be quite noisy at higher gain levels. I take advantage of the fact that the Musicomlab is divided into two sections, A and B. Each of these consist of four loops. Section A’s loops contain the overdrive and distortion pedals, and section B’s loops contain the modulation and delay effects. The wah pedal and section A are inside the noise gate’s loop, but the chorus and delay are not. This allows the delay to keep repeating even if the noise gate cuts the guitar signal. See my article about how to use the noise gate here.

The Nova Drive has 18 presets and  is controlled by MIDI so the Musicomlab can switch presets on it. At the moment I only use three presets, but I plan to make some more.

Here is the finished board: 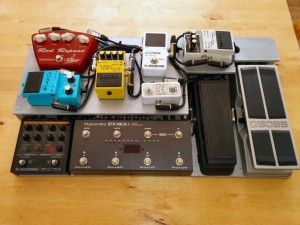 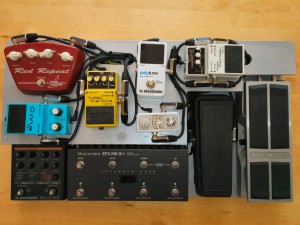 The input and outputs are placed on the back, facing the audience, and the power input is on the left side. 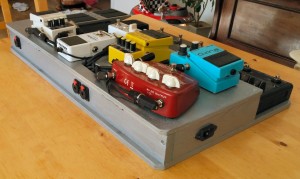 The top of the shelf is hinged at the back and locked in position by one screw so it doesn’t open by accident, but can easily be opened if an issue occurs.

So how does it work in practice?

It actually works really great. It is dead quiet with no hiss, hum or other unwanted noise. There is no signal loss anywhere, and the clean guitar signal sounds great. There are a great deal of options on the board. The Nova Drive has 18 presets so I have up to 19 possible overdrive/distortion sounds (including the Boss OD-2r) that I can switch between on the Musicomlab (so far I have only been using three).

I can also hook up my Strat with a regular mono cable and still take advantage of all the features of the “electric” side of the board. The strat does not have a piezo so it cannot be used for acoustic sounds.