This article describes how I modded my Fender Blues Deluxe amplifier. My amp is a 1996 model (the original). However, this mod will work fine for the later reissues as well.

The background: For many years I have wanted to get my hands on a blackface (or silverface) Fender Vibrolux Reverb. That is the best sounding amp I’ve ever tried. But I simply cannot pay those horrifying prices that people ask these days. So I decided to mod my amp by mounting two 10″ speakers instead of the stock 12″ Eminence speaker. This brings it a little closer to the Vibrolux.

I chose Jensen C10Q speakers for the mod because they sound just right, and they are affordable and easily obtainable in my area (Denmark). They had to be 16 ohms. Coupled in parallel this brings the impedance down to 8 ohms, which is the load that my amplifier expects to see.

In order to fit two 10″ speakers, I had to make a new baffle. That was actually quite easy. I removed the old baffle and measured it. A local DIY store delivered the plywood cut to size.

All that was left was to saw two round holes the size of the speakers. Take care to mount the speakers low enough to go under the transformers and tubes. I managed to fit the speakers side by side near the bottom of the baffle, but it is probably possible to mount them differently if you want. 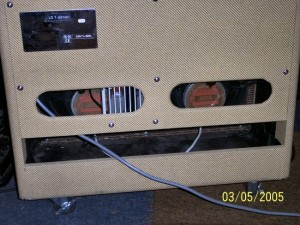 Before the speakers and speaker cloth was mounted, I painted the entire baffle with blackboard paint. This made it look less “home made”… 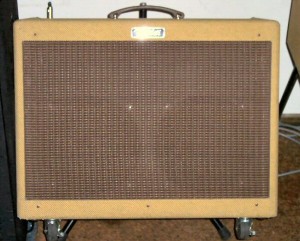 The tubes have been changed to Ruby 6L6 (Svetlana) and JJ/Tesla ECC83S. Henrik from Basslab did the power tube swap, because I’m not capable of doing the bias adjustment myself.

And the result: Amazing!!! – The difference is remarkable! – So much more Fender!